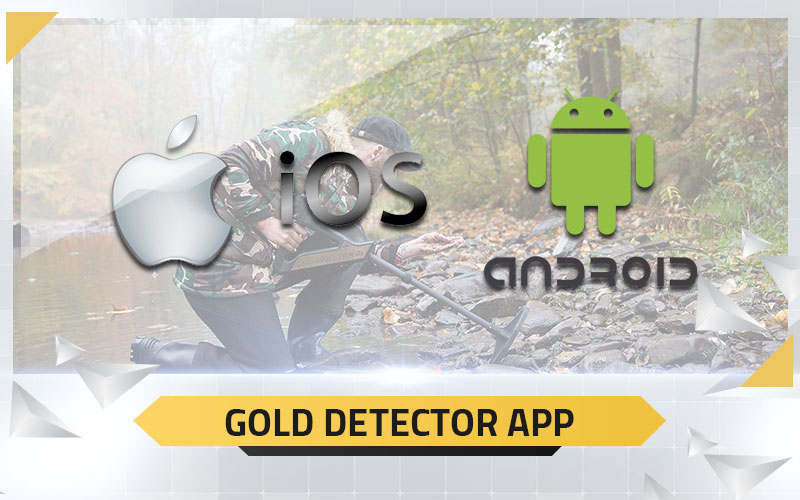 it is used to detect metallic objects within short range.

and receive signals from collision with metal object buried underground, such as golden coin or ancient relic.

In the last years, several applications and programs for smart phones to detect metals and gold detectors

have been deployed and rely on the magnetic sensors available in the smart phones whether they are running Android or iOS (iPhone, iPad).

or a program to detect metallic object uses these sensors.

So, Google Play Store and the Apple App Store have a variety of metal detector app that use a variety of attractive interfaces for the best user experience.

Below we will review some of the best metal detector apps for both Android, iOS

on the Google Play Store, so we can choose a distinctive collection of the best metal detector apps

with different graphical user interfaces and some features.

This app is the best program to detect metal for Android.

because of  its simple and attractive user interface.

with great design and ease of use where it displays on the screen a digital indicator gives an idea of the metal type ..

The device needs of course the presence of a magnetic sensor within the device to work and is available in most modern smart devices.

The device has been downloaded about 10 million times and the application can be downloaded from here:

With gold detector applications you can find any metal including Gold & silver(Ring, Bangles) also with your mobile phone.
Interesting….. finding lost Gold rings,Bangles was a concept only through mobile phones,

now women can use this brand new Gold & metal detector tool to find out their precious gold and jewelries also.
then , process of gold metal detecting will be start by pressing the find button inside the app. and your device beep loudly

so after it detects any metal base item like gold jewelry.

The device has been downloaded about 0.5 million times and the application can be downloaded from here:

These are some of these apps and their links also on the Apple App Store.

A best Metal Detector in App Store since 2012

Simple and intuitive interface, and this absolutely free!

However It’s not fake app, it’s real metal detector, but work with only magnetic metal (such as steel, iron, etc.)

Best sensitivity near the camera on your iOS Device.

The application can be downloaded from here:

Best Metal Detector is an application intended for entertainment purposes only.

It detects the presence of metal nearby by measuring the magnetic field value.

because all metals generate magnetic field which strength can be measured with this tool.

This metal detector developed, tuned and tested during 4 months

By approaching device to a bag or pocket (you can initially switch device to vibration mode for anonymity),

you can easily find out whether there are metal objects.